With Your Hand Upon My Heart Charity Corner 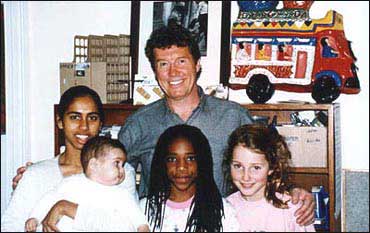 Michael is officially associated with three charities. He serves as Patron of The Lighthouse Foundation in Australia, President of The Sick Children's Trust in England, and Honorary Board Member for Free Arts for Abused Children in the U.S.A.

With Michael as our leader and also of both these charities, he has asked that we direct our efforts toward them, which we do through our fund-raisers and designated merchandise items. The M.C.I.F.A. often provides items for drawing or auction at local gatherings, sponsored by members, assigning items to support both charities at all times.

As an organization we lend additional support to the following charities, although Michael is not "officially" associated with them: the Multiple Sclerosis Society, The National Society for the Prevention of Cruelty to Children, Broadway Cares/Equity Fights AIDS, and Project Linus.

In the spring of each year, walk-a-thons to raise money for the Multiple Sclerosis Society are held all over the United States and are soon expected to "go international." Since 1991, the M.C.I.F.A. has taken part in MS Walks across the United States. M.C.I.F.A. has won several trophies from the MS Society for the largest teams and highest contributions.

The National Society for the Prevention of Cruelty to Children, a London-based charity, seeks to inform, educate, and counsel victims of child abuse with the hope that all forms of abuse will come to a "full stop". The M.C.I.F.A. has supported NSPCC during Michael's 1999 UK concert tour and special events, such as sponsoring Michael's daughter Lucy in the Flora London Marathon in 2000.

Broadway Cares/Equity Fights AIDS is the New York theatre community's answer to the AIDS crisis. Every fall, BC/EFA organizes an annual flea market in which valuable theatre memorabilia from the various theatre productions, past and present, are sold to raise funds for this worthwhile cause. The M.C.I.F.A. frequently sponsors a booth at this event, usually the only "non-cast" organization invited to participate.

Project Linus is for our members who have a talent in either sewing, crocheting, knitting, or quilting. These members make blankets or afghans to donate to Project Linus which, in turn, gives them to children and young people in trauma situations either from an accident or in the hospital.